Ever since I shared in this post that we’re trying to honor where we are in the process of renovating our Master Bathroom, I truly have been breathing easier. (Though, we also decided to DIY the drywall so maybe I should be a little more stressed out?) But, as we steadily work toward the phase of, umm, actually having walls again, certain questions have come up.

First, we dealt with the issue of storage by buying a roomy vanity and making plans for Dustin to build a shelf in next to it as well. Then we opted to swap our tile and shower door choices and got everything ordered.

And now, with a very clear idea of how everything is going to be laid out and look, it’s becoming absolutely urgent that we figure out (and build) the storage solution for our actual shower—or we’re going to be a shampoo-bottle-on-the-floor couple forever, and we can’t have that.

Which brings me to today’s conversation: to niche or not to niche?

Shower niches fall into a few categories (Chris Loves Julia came up with 7), but the classic that we all think of when we think of a niche is probably the rectangular niche with a contrasting tile in it. It feels very “Flip or Flop” to me.

A more modern update on the niche extends it long instead of fitting right between two studs, but that does actually require special framing and therefore is a bit more intense to make happen.

I’m not a huge fan of the niche, only because I feel like it breaks up the look of the tile.

Of course, you can always try to make your niche disappear a bit by using the same tile in the niche, but unless you’re very intentional with your size and tiling, it’s probably not going to line up perfectly.

I think it depends on the look you like, though, because it can also be a refreshing break for your eye and break up a wall of tile. I guess I’m still worried it would look busy.

If you like the look of a niche it’s a super practical shower storage option, and, since you literally indent it into the wall, it’s a great space saver for a small shower. I don’t think it’s going anywhere anytime soon.

But, if it’s a no on the niche, what options does that leave us? Well, one popular one that I keep seeing lately is the shower ledge. Emily Hendersen did a great job educating us on the issue in 2018, but I still have seen it a lot on Pinterest recently.

The ledge is a nice modern looking option, and a great look if you really want that clean, continuous tile look. It feels fresh and maintains your clean lines, and it also is theoretically practical if you buy particularly tall shampoo.

I like the look of the ledge, but it must be admitted that it will encroach slightly on our overall shower space. We’re not working with a tiny space, but we did buy an enclosure that’s a fixed size, so it’s not like our contractor can just make the shower bigger to accomodate a ledge (especially because we aren’t working with one).

We’d probably make it a petite ledge, but we’d still lose at least 5 inches of shower space—is that a big deal? We don’t really know. It’s for sure a contender, but might require us to tape it out on the floor a bit.

Finally, we come to the shelf, which has a lot of iterations, varying from the college “hooks over the shower” variety to very fancy built-in options made of stone. Obviously I’m not putting all of this time, money, and effort into renovating a bathroom just to add a wire shelf that adheres with suction cups.

But I have seen some compelling shelf options that sort of float in the shower. Plus, you can even have them match your tile situation so they sort of disappear. And, you don’t lose as much shower space as you might with a ledge.

(Dustin’s even talking about possibly doing some corner shelves to make use of that dead space but making it custom so it doesn’t look like an afterthought.)

That said, you do run the risk of bumping into your shelves and, since they stick out from the wall, you’re still somewhat breaking up your visual lines, especially if you use a contrasting material.

Okay, so, I’m…not really sure where this conversation got us.

We still don’t know what we’re actually going to go with in our shower, but this weekend is the time to get down to brass tacks and figure it out, because we need to move forward with inspections and drywall.

We’ll probably grab some tape and start brainstorming and cross our fingers that our tiler doesn’t look at us like we’re crazy when we finally figure it out.

So, help me out! Tell me here or on this Instagram post: what would you do? Niche? Ledge? Something else I haven’t even thought of? Save me from shampoo on the floor syndrome, I’m begging you! 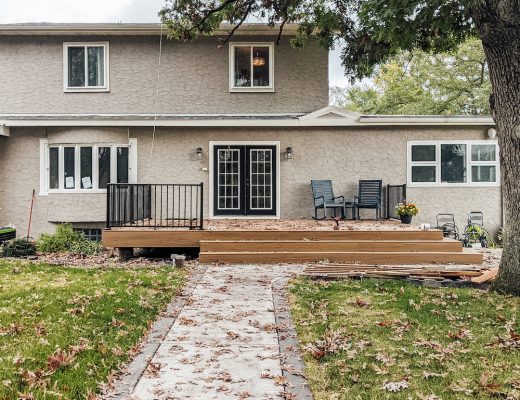 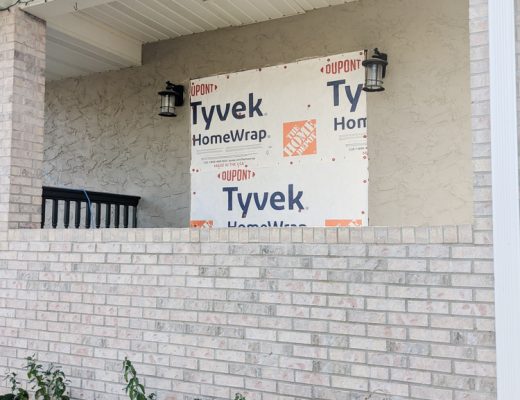 Update: The Decision to Remove and Relocate Our Front Door 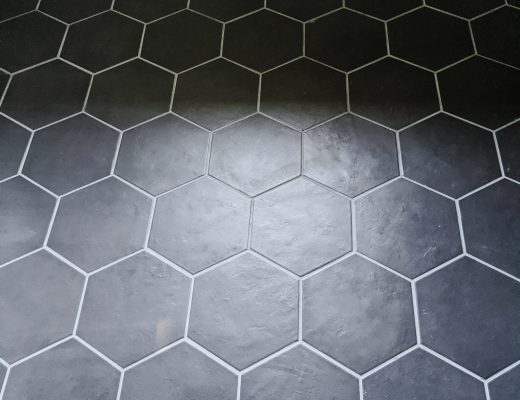 Bathroom Update: We Have Tile! (+Deciding What to DIY and What to Hire Out)