As I shared a couple of weeks ago, while we’re stuck inside for social distancing and our contractors are unable to come work on our master bathroom, we decided to take on our upstairs bathroom and give it a little contractor-free facelift.

This is going to be our guest bathroom in the long term, but it is also the bathroom we’re using right now while we renovate the master so we decided to just go ahead and make it nice.

I have to say, I think that the world of design blogs and HGTV is pretty obsessed with major renovations (not that we’re not—hello, we tore down a bunch of walls on our main floor). While it makes for dramatic reveals and beautiful, functional design, it’s not always realistic. Whether because of a global pandemic or just your average budget constraint, we can’t always dive into a major renovation.

But that doesn’t mean we shouldn’t do anything! I honestly was floored this weekend when we finished this facelift.

For a can of paint and a few hours hanging new mirrors, light, and shower curtain, this space is transformed. Now, the feeling in here is so cozy and relaxed and zen.

Maybe it’s because I picked everything in the space to be right for us, maybe it’s just a little more tasteful, or maybe it’s just that it feels new. Whatever it is, I was shocked by how different this bathroom feels now!

All this to say, whether or not you have big future plans for a space, that doesn’t mean you can’t take steps to improve it right now, without having to take on a major renovation.

Today, I’m happy to share the reveal of this contractor-free facelift. Let’s jump in!

If you will recall, just a few days ago this room was a light yellow color. It wasn’t my style and I didn’t like the yellow glow it cast around the room. I wanted to just brighten it up (at least for now—I’m open to changing the color later) and get a fresh coat of white on the walls.

Now, I think it looks so fresh and clean, which is exactly what you want in a bathroom!

I chose Alabaster from Sherwin Williams because they’re doing curbside pickup right now, and I went ahead and painted the trim as well while I was at it so they’d be the same shade of white.

Plus, we finally got to remove that weird oversize overhead light! It’s actually not a bad looking light, but it’s better suited to a dining room table, in my opinion.

I wanted something narrow to fit between the new mirrors, and something that would send light out and not just down. This sphere and stem pendant from West Elm does the trick!

It also adds a little something modern to the more traditional farmhouse shape of these mirrors. You know I love a mirror with a shelf, but Dustin doesn’t really get it, so I picked this option because the shelves actually fold up—so he can opt out of having a shelf on his side if he wants!

By getting the TP off the wall and onto a freestanding holder, we were also able to add some hooks on the wall to keep towels close to the shower—which is a huge quality of life upgrade!

We picked the same hook in between the vanities for the hand towel, just to keep it consistent.

All of the touches of black really make these vanities look brand new, don’t they? And while we’d love to swap them out for a double vanity for the counter space, we can live with the 2 little vanities for a while longer now.

Touches of Color with Textiles

The bathroom was feeling much better with the mirrors and new light fixture up, but it was a bit lifeless until we got this shower curtain hung. We actually had this same pattern on the walls of our powder bathroom in the City House, since it also comes as wallpaper. When I saw that Hygge & West was printing it on shower curtains now, I knew it would be a fun choice for this guest bathroom.

Dustin was the one who picked this wallpaper for the city house, so he was especially excited when I showed him our new shower curtain. The pattern is so Minnesotan, with fish and deer in the pattern, and the brand is local as well, so that was a great choice.

To complement the fun shower curtain without competing for attention, we ordered towels and a bath mat from Olive & Linen.

The light blue striped turkish towels actually have terry loops on the other side, so they make for a good first step from your standard bath towels to turkish. They look so good! And they’re so soft.

We also grabbed the grey and white striped bath mat from the same place, and it really looks great in here. It’s soft underfoot and absorbent, too.

What do you think? We’re so happy with the results and to have another space in our house completed and feeling like us!

We still have plans for what we’d love to do someday—swapping for a double vanity, adding a built-in hamper, and changing up the linen closet so it’s more usable. But this first step is so refreshing and makes even the things we don’t love (like those 2 vanities) feel much more bearable for now.

The changes we made completely changed the feel of the room without having to hire a single contractor, plumber, or electrician. Even if you aren’t super handy, you can always pick up a paint brush and make a huge impact, or even just get new towels or a shower curtain.

Don’t underestimate the impact those small changes can have! 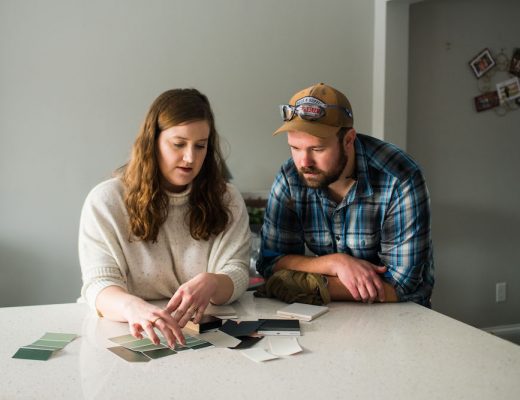 Renovation vs. Decorating: What We’ve Decided for Our New Farmhouse (& How to Decide for Your Home) 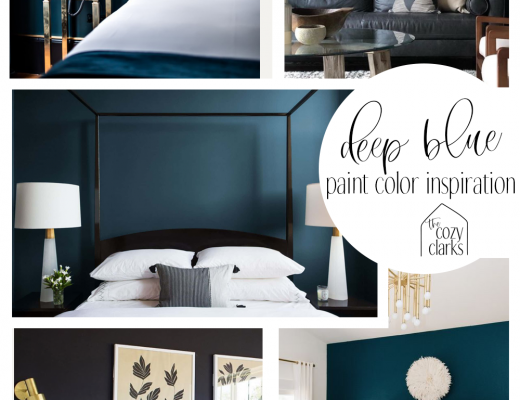 Choosing the Paint Color for Our Bedroom 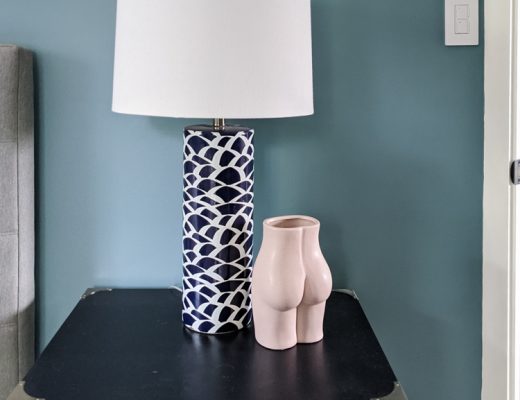